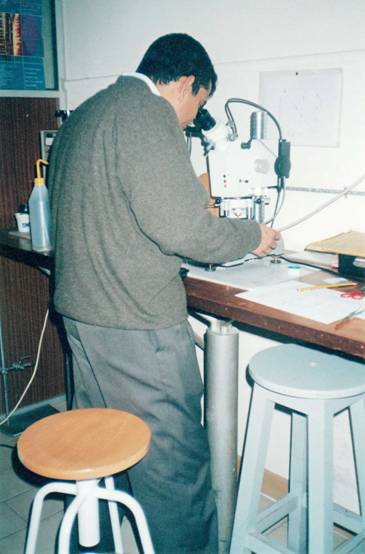 Dr. Md. Forhad Mina was born at Narail, Bangladesh on 14 June, 1968. The Bachelor of Science (Hons.) and the Master of Science (M. Sc.) degrees in Physics were respectively conferred upon him in 1988 and 1989 by the University of Dhaka. Immediately after completing his M. Sc. degree, he was awarded Japanese Government (Monbusho) scholarship as a Research Student of the Physics Department, Shizuoka University, Japan. He took his Doctor of Science Degree in 1999 from the Graduate School of Science and Engineering, Shizuoka University in Materials Science, with special emphasis in the fields of Crystallography and Phase Transitions of Polymeric Materials. He was also awarded teaching and research assistantship while carrying out his Doctoral Program as recognition of his performance. He served with the American International University Bangladesh as a teaching staff from June to December 1999. Thereafter, he joined Bangladesh Atomic Energy Commission (BAEC) as a Scientific Officer in 2000 and was promoted to Senior Scientific Officer in 2005, and in that capacity he served the BAEC till 20 August, 2007. During his tenure at BAEC, he completed Postdoctoral Fellowship Program from the Institute for the Structure of Matter, CSIC, Madrid, Spain in 2002 and Follow-up Research Fellowship from the Department of Physics, Shizuoka University, Japan in 2005. His academic persuasion took him to a scientific visit to Martin Luther University, Halle-Wittenberg, Germany in 2003. He joined as an Assistant Professor in the Department of Physics, Bangladesh University of Engineering and Technology (BUET) on 21 August, 2007 and was promoted to an Associate Professor on 23 November, 2010. Dr Mina has been a Professor of the Department of Physics, BUET, from 23 August, 2014. He has also completed a one year postdoctoral fellowship in the Faculty of Chemical and Natural Resources Engineering, University Malaysia Pahang. His special interests are to perform research on advanced Polymer materials, particularly in processing and development of polymer blends & composites and their characterization using novel techniques- the areas in which he has gained substantial experiences. Moreover, he has also keen interests in crystallization and phase transition studies of novel polymers, including those of bio- and synthetic origin, on which he had extensively worked before and also has further intentions to contribute to this field. He has to his credit about 75 scientific papers, the majority of which were published in internationally reputed Journals.

Sponge-gourd fibers (SGFs) were subjected to chemical treatments such as alkalization, acetylation, and benzoylation by 5−15 wt% sodium hydroxide, acetic anhydride, and benzoyl chloride solutions, respectively, in order to improve fiber–matrix adhesion. SGF-reinforced polylactic acid (PLA) biocomposites were fabricated using melt compounding technique. Both untreated and chemically treated fiber-reinforced composites were subsequently characterized by using a field emission scanning electron microscope, a Fourier-transform infrared spectrometer, an X-ray diffractometer, a universal testing machine, and a thermogravimetric analyzer. Structural analyses show that the chemical treatment improves the crystallinity of SGF and exhibits chemical bond formation in the SGF-reinforced PLA composites. Surface morphology indicates that after the treatment of fibers and increase in the treated fiber content, the interfacial adhesion between PLA and fibers is improved. The effects of fiber loading of chemically treated SGF on physical and mechanical properties of the composites were analyzed. Compressive strength of the composites was increased by 10–35% with incorporation of treated fibers into the PLA matrix. The thermal stability of them is found to increase significantly. Soil burial test has confirmed that the composites are biodegradable. Benzoylation of SGF shows superior mechanical properties and enhances thermal stability among the composites.

Synthesis of copper nanoparticles and their antimicrobial performances in natural fibres

Maksudur R. Khan and A. K. M. M. Alam, Synthesis and characterization of radiation grafted films for removal of arsenic and some heavy metals from contaminated water

Structures and properties of the compression-molded istactic-polypropylene/talc composites: Effect of cooling and rolling

Swelling Behavior of Acrylamide Hydrogel in Different Solvents and pHs

Thermal and X-ray Measurements on n-Hexatriacontane

Swelling and Hydration Properties of Acrylamide Hydrogel in Distilled Water

The structural changes occurring when amorphous cold-drawn poly(ethylene terephthalate) films are annealed at different temperatures (50°C–240°C) for different annealing times (10–104 s) were investigated by means of X-ray diffraction and microhardness techniques. The X-ray results reveal the appearance of smectic order at 60°C with a period of 10.7 Å. At 70°C, a layer structure in the scale of 110 Å emerges. Finally, triclinic order is observed above 80°C. The appearance of a layer structure prior to the development of triclinic crystals is associated with a density difference along the molecular direction produced by a molecular tilting mechanism. The microhardness behaviour of annealed cold-drawn PET films is correlated to the developing morphologies. At high annealing temperatures (>100°C), the plastic component of hardness is shown to vary with the occurring microstructural changes. Results indicate that the hardness of the amorphous intrafibrilar regions is higher than that of a fully amorphous material. The indentation anisotropy, ΔH, which is related to the elastic recovery of the material shows a conspicuous decrease at Ta∽70°C, which is explained in terms of a relaxation of the fibrils in the chain direction.

Isotactic polypropylene consisting of uniaxially oriented P-phase lamellae was crystallized in a temperature gradient. The β → α transition was investigated by simultaneous measurements with differential scanning calorimetry (DSC) and X-ray diffraction using synchrotron radiation (SR). To compare the transition mechanism, the β-phase sample was deformed by rolling it along the direction of the crystallization. During rolling, the β-crystal is deformed by interlamellar and interchain slip, which induces c-axis-oriented molecules along the rolling direction. The melting behavior is changed by the rolling deformation. For the as-grown β-crystal, the DSC thermogram has three peaks: the β-melting endotherm at 150°C, an exotherm by recrystallization into the °-form, and the endotherm at 167°C caused by melting of the recrystallized α-form. After the rolling deformation, the β-endotherm is extinguished by the successive exotherm. Simultaneous X-ray measurements reveal that the β → α transition is shifted to a lower temperature and that the recrystallized α-form has a c-axis-orientation caused by the rolling deformation. In the process of the β→ α transition, higher-order lamellar structure is developed earlier than formation of the crystalline structure. In this study, the heating phenomena, such as the β α transition and thickening of the β- and α-lamellae, are consistently explained by a mechanism involving melting and subsequent recrystallization.

Simultaneous measurements have been performed using differential scanning calorimetry, time-resolved small-angle X-ray scattering and X-ray television (TV) methods to study the solid-solid phase transition of the normal-alkane (hexatriacontane) single crystal. The low-temperature monoclinic form (M L) of hexatriacontane transforms to the high-temperature monoclinic form (MH) by two mechanisms. One mechanism is a direct transition from M L to M H by twin formation without passing any activated state. The other mechanism is a two-step transition through an intermediate orthorhombic state (O), where the molecules stand up from the M L state and then re-incline into the M H state. The subsecond time-resolved investigation by simultaneous measurements reveals dynamic variations during the transition. The former M L→M H transition appears at a lower temperature showing that twin formation requires lower energy, than the two-step process with the activated state. Continuous changing of intensities observed in the X-ray TV indicates that the latter M L→O→M H transition is caused by the coherent motion of the molecules.

Solid-solid phase transition of n -C 36 H 74 was investigated by DSC and X-ray diffraction methods. In the original monoclinic single crystal, molecular chains inclined about 27° in the bc -plane from the normal to the lamellar surface. During the transition started from 72°C and completed at 73.4°C, two kinds of mechanisms were observed in the formation of a high temperature monoclinic structure having the molecules inclined about 19° in the ac -plane. One mechanism was due to formation of twinned crystals where the transition was developed on the frontier of the (110) twin boundary. The twin formation was achieved by rotation of the molecular zigzag plane producing the new crystalline a -axis deviated by 67° from the original orientation. The other mechanism was attained by changing the molecular staggering by 90° where the crystalline axis was unchanged. In the solid-solid transition, the two mechanisms appeared simultaneously, resulting in the appearance of polycrystals.

A Survey of Polymer Crystallization by X-ray Diffraction,