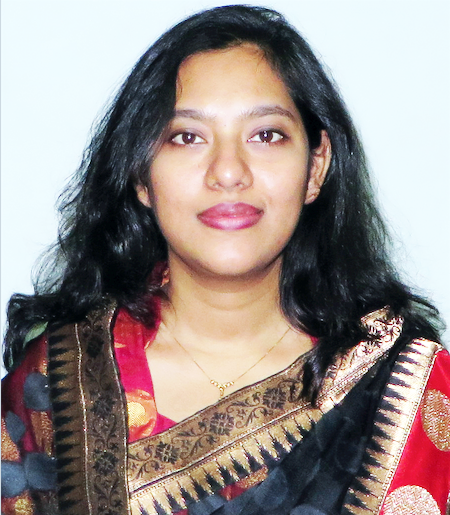 Dr. Parvin Sultana is currently working as assistant professor in the Department of Physics, at Bangladesh University of Engineering and Technology (BUET), Dhaka, Bangladesh. She completed her PhD in Physics from Shizuoka University, Japan in September 2012. In her Ph.D., she worked on all optical propagation and controlling of slow and first optical images through image resonator. She received her B.Sc. and M.Sc. degree in Physics from University of Dhaka, Bangladesh. Her research interests are Green synthesis of Nanomaterials and Nanocomposites, Semiconducting Thin Films for application in optoelectronics, Optical pulse propagation in Linear Dispersive Systems etc.

Zinc sulfide (ZnS) and aluminum doped zinc sulfide (ZnS:Al) thin films have been prepared by chemical bath deposition onto glass substrates at 85○C using non-toxic complexing agents by varying the Al concentration between 0 wt. % and 18 wt. %. The ZnS and ZnS:Al thin films exhibited a hexagonal wurtzite crystal structure and showed (008) preferential orientation. The Field Emission Scanning Electron Microscope(FESEM) images of the film showed that the glass substrate was nicely covered by compact and dense mosaic like nanostructures. The elemental composition of ZnS and ZnS:Al thin films was measured by energy dispersive x-ray spectroscopy. X-ray photoelectron spectroscopy (XPS)demonstrates the doping of Al into ZnS. From the XPS spectra, the binding energy (BE) values were observed to shift toward the lower BE side for increasing aluminum content. Raman spectra were obtained for the undoped and Al doped ZnS films, which exhibit first-order phonon modes at 328.33 cm−1and 341.66 cm−1for the A1/E1 longitudinal optical phonons, and the bands at 253.33 cm−1and 263.33 cm−1revealedlongitudinal optical phonon–plasmon coupled modes. UV–visible spectrophotometric measurement showed that approximately 70%–80%transmission happened in the visible to near infrared region, with a direct allowed bandgap in the range of 3.52 eV–3.76 eV. A maximum transmittance of 80% was observed for 6 wt. % Al doped ZnS thin films, and the absorption edge shifted toward the blue spectrum region.ZnS and ZnS:Al thin films showed n-type electrical conductivity with carrier concentrations varying from 1.55×1017/cm3to 3.13×1017/cm3. Resistivity of the ZnS:Al thin films was decreased with the increase in Al concentration.

We applied Fourier space analysis to a comprehensive study of the propagation of pulsed two-dimensional images through single and coupled image resonators. The Fourier method shows that the image can propagate through the resonator successfully as long as the spatial and temporal Fourier components of the image are within the bandwidth of the amplitude and phase transfer functions. The relevant steep dispersion of the cavity can yield delayed or advanced images. The Fourier method reproduces characteristic aspects of the experimental observations of the image propagation, and also predicts new aspects, such as the spatial image profile dependence on the observation time and the coupling strength. To demonstrate the time evolution of the experiment, space- and time-resolved image propagations were performed using a streak camera.

We experimentally examined the propagation of temporally square modulated optical pulses through a coupled ring resonator. Sharp transient spikes appeared as the square pulses entered the system. The main signal gradually grew up through coupled-resonator-induced transparency (CRIT), with the time constant determined by a second resonator. Transient spikes were attributed to the higher and lower spectral components of the incident pulse, to which the resonators cannot respond; hence, they were interpreted as optical precursors. The experiments, therefore, demonstrated that precursors and the main signal can be observed separately, with amplitudes comparable to that of the incident step in CRIT.

We experimentally investigated optical pulse propagation through an amplifying ring resonator, in which a semiconductor optical amplifier was used as a loss or gain medium. Initially, the transmission intensity showed resonance dips as a function of laser frequency. These dips were gradually filled and transformed into resonance peaks as the amplification gain increased. A Gaussian-shaped temporal pulse was either advanced by −7.3 ns−7.3 ns at low amplification gain or delayed up to 45 ns45 ns at high gain. System operation was classified into a complete set of the four regions depending on the gain parameter, and experimental delay times were analyzed based on relevant system dispersion.

We propagated transverse two-dimensional images encoded on optical pulses through a frequency window of a coupled-image-resonator-induced transparency. The optical images are stored and delayed by 10.6ns10.6ns, reflec ting the tunable dispersion of the coupled resonator. The k-space bandwidth of the amplitude transfer func tion of the system is discussed in the presence of the off-resonance Fano interference effect between the two resonators.

Advanced and delayed images through an image resonator

We performed optical image propagation experiments in an image resonator consisting of a Fabry-Perot resonator in reflection geometry. Two-dimensional images encoded on optical pulses of 32ns were stored, and either advanced, −6.0ns, or delayed, 10.9ns, using the dispersion relation relevant to the image resonator, in the under- or over- coupling condition, respectively. The overall images are propagated through the resonator clearly, while the diffraction effects were analyzed both in real-space and in k-space.

Silver nanoparticles have been produced by laser ablation of silver metal in nanopure water without any chemical additives. It has been observed that laser power has a control over the size of the nanoparticles. Increasing laser power shows a clear blue shift in the absorption peak of fabricated nanoparticles indicating that the average size of the particles decreases with increasing laser power. Ablation for longer period reduces the average size of nanoparticles which is attributed to the re-ablation of fabricated nanoparticles. A good correlation has been observed between the peak of the absorption spectrum measured by UV-VIS spectroscopy and the average particle size measured by scanning electron microscope imaging method. The value of the coefficient of correlation is determined to be 0.965.

Slow and Fast Images in an Image Resonator